There is basically physical and mental laziness and it is mostly society which promotes both forms of laziness culturally and if you are a victim then you are only partially to blame for it.

Physical laziness conserves body energy and is a very efficient way of surviving which the body frequently prefers. Only about 3% of the adult population exercises regularly unless you consider physical labor on the job exercise which will increase that percentage somewhat. The second reason for physical laziness is the sedentary culture which promotes the physical inactivity of its citizens.

Young offspring are physically active but by the teenage years this physical dynamism has been reduced by cultural emphasis on physically passive schooling and computer, TV, and cell phone usage.

Not all humans are as physically coordinated as the best athletes and many are disappointed with school sports because it makes them feel inadequate physically so they choose not to participate in sports because sports are seldom emotionally rewarding for the average human.

Our minds are still active even though we are couch potatoes but physical activity has been conditioned out of us culturally.

If you are physically lazy then you can blame yourself but a boring unfulfilling job which doesn’t pay much and living in a city may limit your choices of being physically active in a non-boring way.

Not succeeding at difficult largely USELESS schoolwork may make your mind lazy and not want to do anything difficult mentally which will kill your motivation to learn new information which you could successfully use in your life. Poor education or lack of USEFUL education and brainwashing by the media and commercials is the major reason why most citizens are mentally lazy with little motivation to improve their many bad mental habits.

Little logical reasoning ability is taught because of a heavy dose of liberal arts keeps humans stupid and lazy mentally by making them learn largely USELESS information which they don’t use in life. They are not only trapped physically into inactivity but their USEFUL mental activity is also very minimal and lazy intellectually.

Garbage information into the brain means garbage information output by the brain and makes the brain mentally lazy because very little makes sense and can be applied to real world living experiences. One glaring example of this fact is that many high school graduates don’t know how to budget their money with a calculator and enter the adult world living paycheck to paycheck profligately spending every cent.

If you are lazy physically and mentally then blame it on your lazy parents and the largely illogical liberal arts educational system trying to make education fun and easy but NOT very USEFUL in everyday life as an adult. 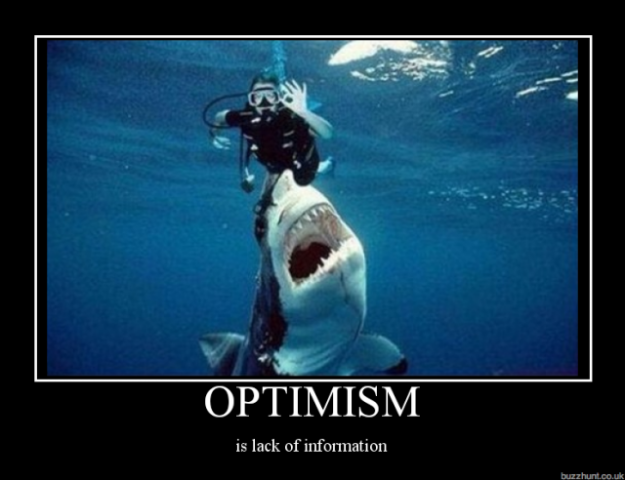 Optimism: n. a belief that a goal(s) will be achieved with a relatively large degree of probability and a general belief that good events will be more frequent than the bad events in living

Pessimism: n. a belief that a goal(s) will be achieved with a very low degree of probability and a general belief that bad events will be more frequent than the good events in living

Optimism is a belief that you can make realistic small and large goals in your life and achieve many of them and also a belief which is not always justified that the good events in life will be more frequent than the bad events in your life.

There are many humans who start out life very optimistically as young adults and due to much misfortune or too many setbacks in life become more pessimistic about being able to reach all the goals which they thought could be achieved by them.

Frequently the reason that humans become pessimistic is that their goals in life have been too unrealistic. To achieve those rare admired positions in society they just have not realized that it takes an above average human with a very good memory or exceptional physical skills to reach celebrity status or achieve a very complex profession such as a doctor or engineer.

A good useful education is frequently a prerequisite to a high status position in society and it frequently means attending a good school, working hard, having enough ability, and having the financial backing to pursue useful higher education.

Most students, especially those coming from poor neighborhoods, don’t get a good useful education and don’t have the financial resources or grades to get useful higher education in a relatively prestigious university.

Handicapped by useless education and a job poor economy for the liberal arts majors it becomes increasingly hard to maintain an optimistic attitude about life without a job or working at minimum wage in a boring job and it is one of the major reasons for depression in young adults starting off in life.

Most common humans must adapt to the reality that they will probably be working in a rather unsatisfying job and that their lofty goals will fail. To remain optimistic the common human must learn to be satisfied with the little achievements in life and must learn to live happily with them.

Failing to lower your goals means that you may try to escape your depressing unsatisfied existence with dysfunctional living and getting addicted to drugs, alcohol, gambling, promiscuity, pornography, and other bad addictions which will screw up your boring life even more and make your life a pessimistic rat hole.