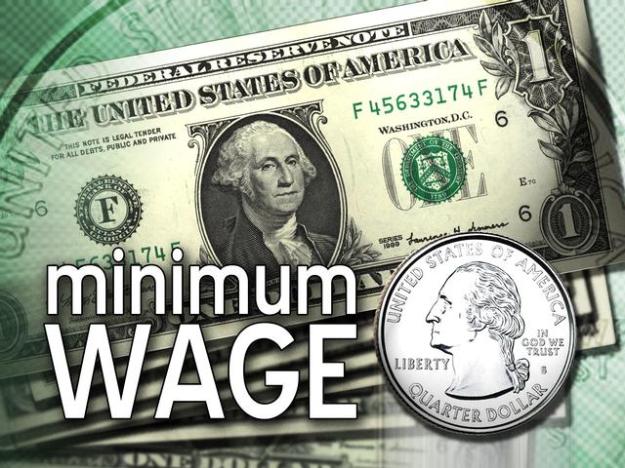 If we had a safety net for all those unemployed and also destitute then we would not need a minimum wage but anyone could live in the safety net and only go to work voluntarily if it was a living wage. Employers would have to pay a wage that workers would be voluntarily willing to work for. No minimum wage would be necessary!

Of course reality is such that local communities have housing laws which have occupancy limits per household so providing shelter to the unemployed and also destitute is a huge expense for welfare and tax payers. If local communities permitted an occupancy limit of about 4 occupants per single bedroom apartment then welfare could provide cheap shelter for those in distress. Government could then hire private agencies to deliver minimum basic standardized necessities door to door for the unemployed and also destitute at minimum cost to the taxpayers.

Government would not have to provide any spending money for the welfare recipients and they would be living without cash which they usually spend irresponsibly on impulsive buys, alcohol, cigarettes, and drugs anyway.

Of course realistically this would mean unemployed ghettos in communities where high density living would be permitted.

Government could then create a resume video of all those on welfare and employers could scan them for potential job candidates. The employers would interview the candidate in person at their home residence and make arrangements to rent out a scooter or three wheeled motorcycle in the snowy north so that the welfare recipient could commute to and from work.

One further point. For all those willing to put in the time, effort, and achievement free internet education in useful technological job skills could be provided by the government for free. This way self-motivated humans with ability and a desire to learn new useful skills who lost their jobs could stay at home and reeducate themselves for the new technological 21st century.

What is the motivation to start work or reeducate yourself on the internet for free??? I don’t want to live for free in a drug free ghetto without cigarettes, alcohol, or spending money and share my room with three humans for the rest of my life!!!!!!

No minimum wage is necessary if the welfare system is radically overhauled to make way for 21st century job scarce realities. If the unemployed and also destitute want to escape the high density ghetto with free room and board and no cash to spend they could start work voluntarily and once again have spending money which they could spend in the outside world and move out of the ghetto once they could independently live on their own with a living wage.

My evergreen truth book CHANGES IN WELFARE LAWS shows in detail the necessary laws which have to be passed to make a just welfare system possible where there is truly hope of escaping the ghetto in a voluntary efficient way for the benefit of society and especially for the benefit of the overburdened middle class taxpayers.