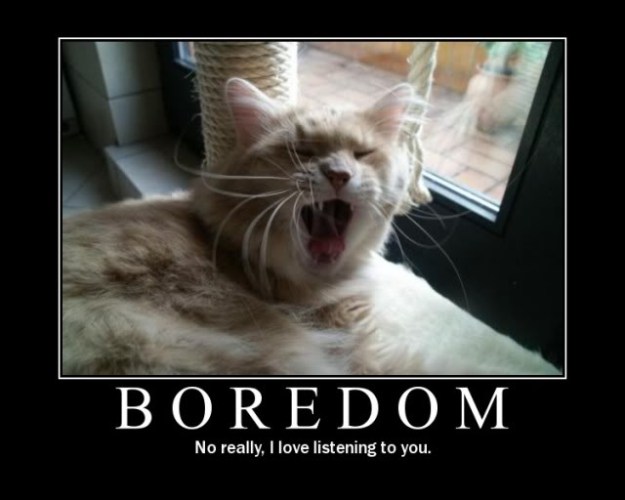 Sometimes spending too much time with something like listening to music for too long begins to bore us and we decide to go on and do something else. We basically deplete our energy resources, feel tired, and are not that motivated to concentrate our attention on the subject matter, especially if what we are doing is not benefiting us in some major way such as making us more money or increasing our enjoyment level to new highs.

Finally we may get bored because we have repeated something too many times and it is beginning to feel like deja vue or that we have done that, seen that, and want a new kind of experience. Eating the same food day in and day out, even if it was tasty at first, will begin to bore us and the satisfaction which we get out of the experience frequently has also decreased.  Obviously if the repetitive task is greatly benefiting us with more money or increased enjoyment then the repetitive task will not bore us as much as it would if there is no noticeable benefit.

If there is great financial benefit or if something gives us rather high levels of enjoyment then we generally do not get bored with too much repetition or spending too much time doing something. In fact the thing which we might be doing can become so addictive that we never get bored doing it and we may be willing to do it to the point of exhaustion many times. We frequently get bored if what we are doing is no longer a rewarding experience.