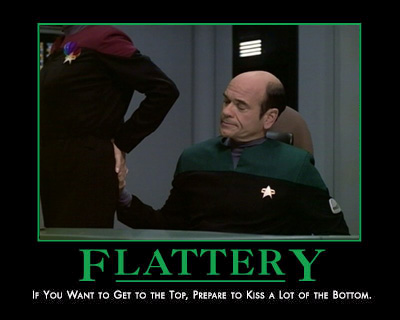 Flattery: n. praised beyond objective need and frequently with some dishonesty

Many fall victim to flattery because most of us like to be praised for looking good and behaving admirably. Flattering your boss or an authority figure is frequently seen as a valid way to get favors in return.

Flattery is frequently excessive praise or it is dishonest praise done to make a human feel good or important and if you believe your flatterers than you run the risk of inaccurately judging your own potential as a human being.

Many celebrities are flattered so much that they lose touch with reality and frequently live lives of isolation from the real world and real humans.

If you are victimized by yes men and yes women which you surround yourself with on a daily basis then you too will lose touch with reality sooner or later to your own personal detriment. There is nothing more helpful than honest criticism to get you back into a more realistic appraisal of your real abilities and potential.

Flattery is BS praise which you should be aware of and you should try to avoid the flatterers as much as possible to live sanely in the real world.