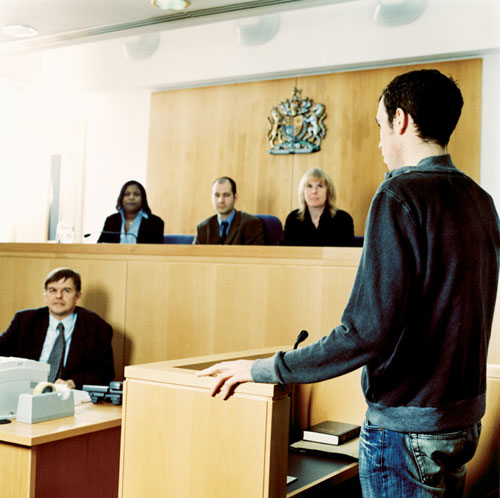 If I was rich and could afford the best lawyer(s) then I would conclude that the courts are indeed just and even biased in my favor.

If I was poor and couldn’t afford an excellent lawyer then my only hope would be to maybe plea bargain to a lesser criminal count and be found guilty for a lesser crime. In fact about 90% of all convictions are plea bargains partly due to the extremely large number of caseloads and it is an attempt to reduce court costs by not having to appear in court and use up precious time and money.

If you do wind up in court then good witnesses, professional opinions, and lawyers who can present facts and events in an emotionally compelling way give you the edge you may need to escape a guilty verdict.

If you are suing someone then make sure that they have deep pockets or much money because if they are poor you won’t get a dime from them and you will have to pay your lawyer for the time and money spent prosecuting.

Suing very wealthy individuals or corporations is almost impossible to do successfully and even class action suits will probably net you no more than a thousand dollars because at least a third of the money will be spent on lawyer fees and you will almost be waiting forever for a guilty verdict.

Next to money the next important factor in court cases is the reputation of the prosecution and defendant witnesses and the jury. In a modern age with so many with bad reputations for adultery, promiscuity, drug use, and lying it is getting increasingly hard to get someone to tell the truth, the whole truth, and nothing but the truth and the net result is many sham convictions.

In a largely moral society justice will prevail most of the time but in a modern increasingly immoral society the court system can’t be trusted to give just verdicts in many cases.

A return to an updated secular moral code which is taught impressionable young minds in elementary school is a must if the court system is not to further disintegrate into an unjust scam for talented liars and the powerful with much money. If humans are not conditioned from an early age not to lie, not steal, not commit adultery if married, and not deceive then I only predict the court system will become more unjust with each passing year.