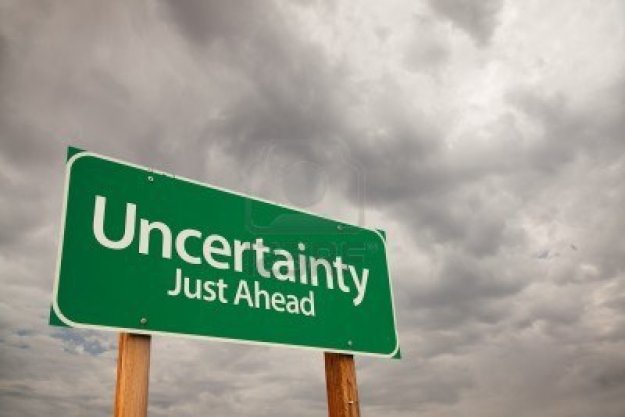 If it is a scientific fact then we can frequently say that the uncertainty is zero percent but if it is a political or economic prediction then the uncertainty may be less than 50% or only slightly better than flipping a coin. Politics and economics is a statistical evaluation with rather large margins of error in many cases and many crises situations are not very predictable at all with great uncertainty.

To help us with uncertainty we frequently consult reputable sources of information or try to get our information from humans whom we consider experts, reliable, or trustworthy. We are frequently less convinced of the information given by a stranger than a trusted friend and prestigious publications are preferred over other less known sources. Even prestigious publications and authority figures are sometimes wrong about their views or communications so there is really seldom 100% certainty in most things with the possible exception of scientific facts and observations such as the certainty that the sun rises and sets every day.

Many cling to old and sometimes unpleasant habits because they are frequently more certain than trying to change and being confronted with an uncertain future. Humans are resistant to change and that includes their beliefs and opinions which provide them with certainty and they are frequently reluctant to change because they fundamentally fear the uncertainty of change to their value system and beliefs about prior experiences.

Humans frequently try to impose certainty on things which are fundamentally uncertain such as gambling where winning a few times is assumed to be a winning streak even when it objectively is pure luck and the odds are really against the gambler in the long duration.

Call it a fear of uncertainty or a desire for certainty. They both can lead to purposeful behavior designed to achieve a goal(s). Many new goals have some uncertainty but unless you try to achieve them with purposeful effort the probability of achieving them is zero if you don’t try at all.

Uncertainty and doubt are frequently one and the same thing. There is never 100% certainty or a guarantee that something will exist or is true when it needs to be or preferably for a long duration.

A right or wrong answer on a test is perhaps one of the main areas of life where there seems to be some certainty without doubt.

Perhaps the biggest uncertainty is the lifestyle which we are living because the only certainty is that it will change as the years go by and this creates uncertainty in our lives which some humans worry too much about.

If someone is causing fear or anxiety in your life by stalking you, bullying you, or making unwanted sexual advances on you then you are being harassed. Basically harassment is interfering with your peace of mind but usually not in a violent way.

Verbally threatening your life is not only verbal abuse but a form of harassment which can be considered to be one step away from actual physical violence. The emotional trauma can be very severe and really cause you to fear for your life.

Some forms of harassment are merely annoying or very unpleasant such as cyber stalking where you get unwanted phone calls and emails.

Males frequently harass more than females since many are overly aggressive but harassment can come from either gender.