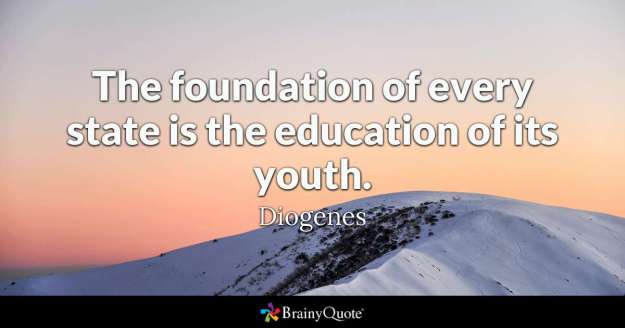 Big money rules the world but the success of a nation is determined by how the money is distributed to promote a useful education and good work ethic for the majority of its citizens.

Religion has traditionally filled this moral void but in increasingly secular societies young impressionable minds must be indoctrinated with a secular moral code so that they can impulsively make moral decisions without always having to stop and ask when interacting with other humans- Is what I am doing right or wrong?

Realistically, all offspring by the age of about 13 should be able to discriminate between what is morally right and what is morally wrong. In a nutshell that secular moral code should be- in nonemergency situations- don’t destroy biodiversity, don’t lie, don’t be inefficient, don’t steal, don’t commit adultery if married, and don’t murder.

Next in importance is an education which encourages competence in basic skills such as reading, basic math, and budgeting your money or paying attention to the price of products and their relative quality. Price per pound calculations and awareness of food ingredients and all additives is vital to a healthy organic diet and a healthy society in general.

Not often mentioned is the importance of efficiency in everyday life. To maintain an industrious, smart, hard, work ethic, vocational skills should be taught in high school. Real life work experiences should begin at about the age of 14 and definitely by the age of 16 for all those not academically inclined.

In a fast changing technological age your education should really be life long or never cease. Selfeducation is very important and all citizens should be taught how to maintain childhood curiosity and learn and relearn throughout a lifetime to keep pace with rapid societal change. For all those falling through the cracks who become unemployed and also destitute, online free internet useful education should be provided. This is so that there is always the hope of making it back into the workforce with personally devoted time, energy, effort, and ability.

Working for a lifetime for a company will probably not be a viable alternative for the average worker in the future modern world. That is why the opportunity to reeducate oneself throughout a lifetime will become very important and need some monetary educational government assistance.

Government workers seldom get fired but a huge inefficient government bureaucracy is also not an acceptable answer or solution.

A dystopian society is an unhealthy, ignorant, drugged, lazy, criminal, majority on permanent welfare or in jail. If given a choice, I don’t think anyone would really want to live in such a society.

A realistic good functioning society is healthy, educated, moral, drug free, industrious, and employed for a large percentage of a human’s lifespan.  How do you incentivize a society to reward these kinds of humans? I have spent a lifetime trying to answer this question in detail in my writings.