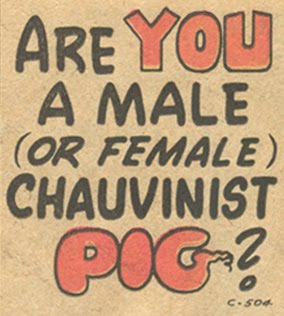 Chauvinism: n. a human convinced of the superiority of one’s gender and/or group

There are religious chauvinists who believe in the superiority of their religion and there are ethnic and gender chauvinists who believe in the the superiority of their ethnicity or gender. Male chauvinism has recently been denounced and it is because we still generally think of males and females as stereotypic behaviors which today have very many exceptions and it is frequently an inaccurate portrayal in the modern world of individual men and women.

Generally men are taller, stronger physically, more aggressive than women who are generally more talkative, caring, and live longer. Men have been the dominant gender historically but women are beginning to assert themselves politically in an era where physical force is no longer that valued.

Rather than saying that one gender is superior to another it is more appropriate to say that each gender has its weaknesses and strengths and acting together they can complement one another very nicely to raise offspring in an optimal way.

If you liked this evergreen truth blog then read more of them or read one or more of my evergreen truth books, especially COMMON SENSE, rays of truth in a human world filled with myths and deceptions.