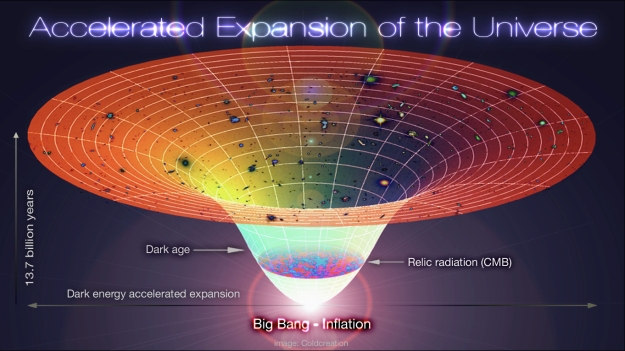 According to the false theory of the expansion of the universe the galaxies are actually expanding at faster than the speed of light thus disobeying general relativity theory. This wrong hypothetical extra gravitational repulsion comes from an independent dimension which contains dark matter and dark energy which only interacts dependently with matter and energy through gravitation. In effect a miraculous parallel universe has been created which mysteriously acts on the physical universe through an additional repulsive force which should really be called dark gravity and not the gravity of the physical universe.

Dark matter and energy can’t be observed or measured so how can we calculate the frequency or frequencies of it using string theory? Impossible to do! If you crazily assume that light travels through dark matter and dark energy and it exerts a gravitational pull on it then maybe the red shift is the effect that you get. The universe may not be expanding at all but the red shift is due to the effect of dark matter and dark energy on light energy and matter. Physical space which can’t be seen or measured may not be an empty void after all.

Is dark matter denser than dark energy? Does dark matter have dark atoms and dark electrons? There are no answers to these questions but shows how insane these analogies to physical matter and energy are. Science is observation and measurement and not the science of analogies which predate science and mathematics. Once scientists begin to use analogies to describe nature they prove that they don’t know what the f**k they are talking about and are living in the dark ages!!!

Theoretical physicists are trying to play God by inventing miraculous theories to explain what can’t be explained logically and they are creating the modern mythology which is wowing their followers rather than making them recoil in shock and anger that they are in fact being deceived into believing the impossible! What is causing an additional gravitational repulsive force? Why Godlike miraculous dark matter and dark energy!!!