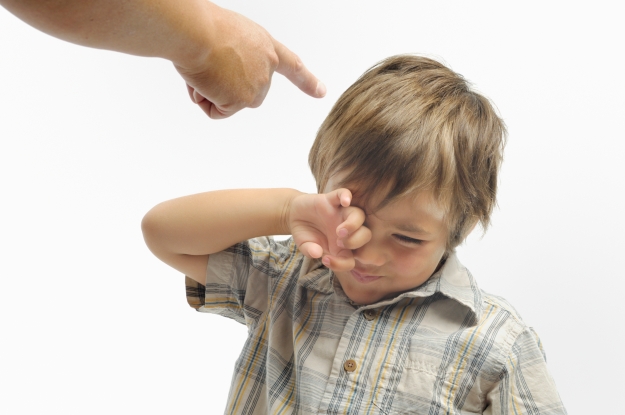 Crying boy being disciplined or punished.

One of the most effective ways of letting kids learn about the wrong things to do is to let them suffer the consequences.

Buy a relatively fragile toy and warn them sternly that it is fragile and it will break if thrown around or dropped from a high height. Then let the child play with the fragile toy until they wind up breaking it. Then tell them that because they were not careful enough the toy broke and tell them that it will be a long time before they will be trusted with another fragile toy again.

Obviously if the child is too young to be trusted with toxic household chemicals, dangerous medicines, or sharp objects like knives and sharp forks then these objects should be locked away in a secure place inaccessible to the child. You would not want them to suffer the bad consequences of being poisoned, cutting themselves severely with a sharp knife, or poking out an eye with a sharp fork.

The swimming pool is very dangerous for very small children and it should be fenced off until the child is taught to tread water or minimally stay afloat.

Logical consequences can also be taught with consistency.

If a child begins to throw a toy around which is not meant to be thrown then it can be removed and placed on a shelf for the rest of the day. A toy which is meant to be shared can similarly be removed for a day if sharing does not occur. If the children are old enough to tell time then you can request that each child share a toy for 10 minutes at a time. Once again, if the toy is not appropriately shared then it can be removed for the day. Sometimes a toy can be shared on a daily basis and one child may have it on Monday and the other can have it to play with on a Tuesday, etc.

Bathing, brushing teeth, and putting dirty clothes into a laundry hamper is a good routine to get into before bedtime. Once again a threat to remove a favorite toy for a day or a few days may be used to get compliance. Not highly recommended but possible is to force a child to put dirty clothes in a hamper by physically making them go through the motions by grabbing the child’s hand and moving his or her body from clothes to hamper until all the dirty clothes have been dropped in.

If a child does not finish dinner then that is just fine but warn them that they will be given no food or snacks until the next meal time. Children these days are overfed and missing one or two meals is not a tragic or unacceptable circumstance. Our ancestors sometimes went days without eating and even fasted at certain times and frankly only ate when hungry.

Another technique used by parents to stuff their kids is to say that you will only get desert if you finish your meal. Frankly, desert should be maybe a once in a week event since overconsumption of sweets is a major cause of diabetes and other eating problems. Supermarkets are overflowing with sugar added to lousy over processed foods of all kinds and is a major reason why many humans no longer eat healthy well balanced organic food meals.

For children fighting scolding in a loud voice can help and if that fails separating them physically and carrying one off to sit in a chair in a corner by themselves for an hour or so is usually effective. If a child throws a tantrum in a public place then physically removing them from that location and getting them to quiet or cool down in the car or outside the public location usually works if reinforced with the words-are you now ready to go back and behave?

Withholding a child’s privileges works well for all ages.

Withholding a cherished toy, not letting a child play outdoors for a day, or not letting him or her play with a playmate are privileges which can be withheld for bad behavior or as a form of discipline. For older children taking away a cellphone or computer for a day or week and grounding them for a given time are ways to get compliance with household rules and good behavior.

Spanking is usually not recommended but there may be certain children who are becoming compulsive liars or stealers and adults can be severely punished for these behaviors. Explain first to the children that lying and stealing destroys the trust between humans and they can no longer be good friends or no one will believe them anymore and that adults are punished for stealing with fines and jail. The threat of spanking should first be done for serious lying or stealing and then a consistent follow through with the spanking punishment if the intentional lying or stealing occurs again.

Discuss the logical consequences or reasons why bad behavior should not be tolerated.

Parents are usually not very good at this.

Reasons against fighting can be physical pain or harm on another, causing aggressive emotions and actions in another or probable bad retaliation, parents don’t physically fight with one another because they love one another and want to live together peacefully, and finally adult fighting is called physical abuse or battery and aggression punishable by jail time.

Reasons against yelling indoors is that it disturbs or annoys others who may not be able to concentrate on what they are doing, it is usually done in emergencies such as an accident, and it is usually done outdoors to cover a larger communication distance and to signal danger such as a speeding car or bicycle, etc.

Reasons for being polite, kind, considerate, empathetic, and friendly is that most humans will like you more and may even become a friend.

There are just times when something isn’t fair in the child’s mind or when the child asserts his or her stubborn self and refuses to do something no matter how reasonable it may be. These are time when the parent has to say “yes, it isn’t fair” or “I know” and proceeds to enforce the rules saying Me and Mom are in charge of the family and rule enforcement and we are the final authority in making decisions for the children in the family. When you have children of your own then you can be the boss over them when they are young.

Finally the most important thing is to be a good role model for your children since most children ultimately behave like their parents later in life and act the same way towards their own children also. If you want your children to not smoke, not drink, not do drugs, not curse, not gamble, not fight, not frequently argue and if you want them to be polite, kind, courteous, empathetic, friendly, and loving then be that way yourself and interact appropriately with your spouse and other humans.

Abridge: v. to decrease the right(s) and/or privilege(s) of a human(s)

If you liked this evergreen truth blog then read more of them, about 2700 so far, or read one or more of my evergreen truth books, especially COMMON SENSE, rays of truth in a human world filled with myths and deceptions.

Remuneration is usually money given but you can also pay someone for doing work by granting them a privilege. The best work incentives are not always money but privileges granted which elevates the status or feeling of importance of the worker getting the privileges.

If you liked this evergreen truth blog then read more of them, about 1800 so far, or read one or more of my evergreen truth books, especially COMMON SENSE, rays of truth in a human world filled with myths and deceptions.

Reward: v. to do and/or give a usually pleasant subset(s) which is done and/or given for achieving a goal(s) and/or for doing a (good and/or right) and/or legal subset(s)

You can be rewarded with money, information, goods, or services for reaching a goal(s) and these are the most obvious form of a rewards but you can also be rewarded with a privilege, status, or right to do something which others generally don’t have.

Having good relationships with offspring, spouse, close friends and humans in general is the reward that you get for leading a moral life. Failure to lead a moral life leads to punishment with dysfunctional relationships and much personal misery and unhappiness.

The least materialistic kind of reward is a grade (status reward) or mere praise for doing something good or good behavior.

Money frequently seems like the best motivating force but a desire to get good grades and getting them motivates the achievers. A selfmotivated student who enjoys working hard at learning and gets good grades is a joy to have in the classroom.

Creating a sense of belonging, purpose, and selfworth in an individual is frequently a key to having a satisfied and industrious employee who may not be paid that much for their effort. A selfmotivated competent employee is the best kind of employee to have who seldom needs external motivation from a boss or manager.

Having pride in yourself and striving for competence in everything that you do is a very valuable selfmotivating state of mind because relying on the kind words and the praise of others to motivate you is not a reliable source of motivation and you will wind up too frequently trying to please others and not pleasing yourself where it is most important.

Finally nature rewards us with the gift of life and if we eat healthy, move around enough, live carefully, and live moral lives then the probability of being rewarded throughout a lifetime and reaching old age is greatly increased.