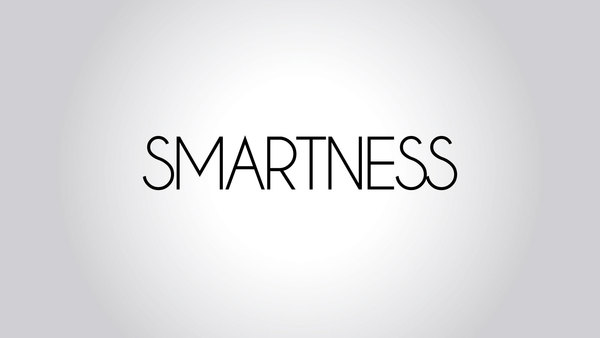 Smartness: n. a human having complete logical reasoning skills and successfully applying them to solve political and social and economic and scientific problems and/or having emotional intelligence

Intelligence is really having a very good memory for facts and information which may not necessarily be used in a smart way. Being smart is having the reasoning or logical ability to find practical solutions to problems and an added bonus is having emotional intelligence which helps you to successfully deal with human emotional states.

There are many smart humans with relatively little book learning who have had extensive contact with humans and have learned important information on their own or with personal experience. It can help in many instances to have good grades and a college degree but there are plenty of very smart humans who have become very successful without the formal education. Very smart humans are frequently bored by formal education and learn most of what they have to know on their own.

Historically polygamy was acceptable for wealthy ruling monarchs or more accurately top leaders and it was an excellent way of reproducing talented offspring for the next generation of rulers. It also was an excellent way to avoid adultery and promiscuousness because instead of being promiscuous or adulterous you could just marry your next infatuation. Even in the modern age some Arabs are polygamous and they are carrying on an ancient acceptable tradition.

The only disadvantage of polygamy is that the money power in the world could potentially be once again in very few hands and some of the power would be transferred as inherited wealth to humans who don’t deserve it or have not worked for the money and are really undeserving corrupt manipulators or spenders of it. Inheritance based on merit would not apply in many cases and a new immoral generation of incompetent rulers could potentially arise. It should be the responsibility of the wealthy male to determine who the most deserving of his offspring should inherit his wealth and it need not be the first born but rather the most meritorious one or two or three.

Polygamy should be legalized in the west for very wealthy males with incomes in the many millions or billions so that they can reproduce potentially talented offspring for the benefit of future generations. In case of divorce which may be relatively frequent in the west, they should be required to set up an escrow account with the government so that the divorced women and offspring would not have to go on government welfare but would be financially provided for.

Not so obvious is the fact that most common humans should be monogamous and not be polygamous because in case of a divorce or financial breakdown there would be many divorced women with offspring without alimony payments all going on government welfare at taxpayers expense.

With a social incentive to become rich and legally be polygamous many males would be motivated to make much money and then they could brag about how many wives and offspring that they have and not how many airplanes, yachts, mansions, and cars that they have. Put your money where it counts the most, in the next generation of humans with excellent memories.

Yes, there will be many talented writers, scientists, business humans, and technologists who will never be very wealthy and should theoretically all reproduce with many wives and offspring but life is not fair or just and only an enlightened society will be able to judge talent objectively and not subjectively.

There is primarily only one objective measure of talent and that is how good a memory you have which means that you can learn information and skills at an incredibly fast pace. Yes, there are idiot savants but those are the few exceptions to the rule that excellent memory is a primary need.

There are many humans with high IQ’s doing some pretty stupid things so IQ alone should never be used to judge how smart and talented an individual really is. A lifetime is ultimately the determiner of how smart and talented you have been and no subjective culturally biased test of mental ability will predict how smart or talented you will be in life. Excellent social skills are frequently more important for leaders than book learning and scoring high on a standardized test.