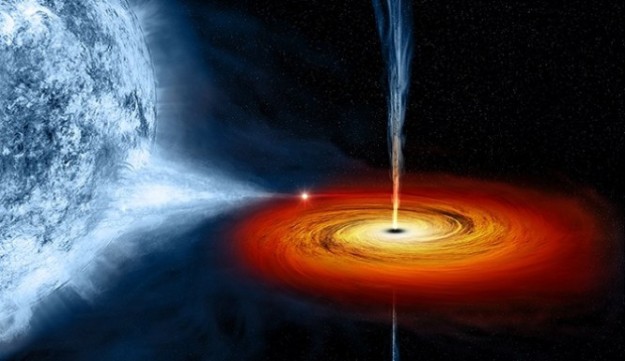 Thank goodness illogical irrational modern theoretical physics theories are being put to rest one at a time. One of the next steps is to eliminate the singularity paradox of string theory when the frequency becomes infinite resulting in infinite energy.

Worm holes, bubble universes, and time travel are also high on the list of irrational things to eliminate from modern theoretical physics! If a black hole can’t exist then neither can a worm hole! etc. etc. All that mythological crap should be purged from a discussion of modern physics!

Here is an article which finally argues that the singularity of a black hole is absurd and that black holes in fact don’t exist!

String theory is a misguided attempt at trying to explain all the forces in the universe which include gravity, matter, and energy with the concept of a vibration between two points in space.

What happens when the two points in space are brought together? A singularity is the result which means that you have an infinitely small point and an infinite frequency which no one understands or will understand. Sure, it can mean infinite energy which is just as incomprehensible.

Dark matter theoretically is covered by string theory and dark matter is a higher frequency or octave. Then what is that higher frequency? How many vibrations per second or are there more states of dark matter represented by different frequencies? How do we measure the vibrations per second if we don’t have the apparatus invented to detect those frequencies? If you can’t observe and measure the frequencies then you can’t prove a damn thing according to the scientific method.

Finally string theory is limited by the vibration between two points in space and the fact is that there may be vibrations between two or more points in space all around the center of the vibrations since matter is three dimensional and the vibrations can theoretically originate from anywhere on the tiny sphere and end on any other point on the sphere. Mathematics can simply not handle multi vibrational points at once. Two variables at a time and not more than two variables at a time are handled by mathematics. Mathematics is too dumb for physical reality which has more than two points interacting with each other gravitationally in a given time period.

String theory is a mythological modern concept which will explain very little if anything and the possibility of it being the explanation of everything in the universe is the BIG LIE!!!!!! Modern theoretical physicists largely don’t know what the f**k they are talking about and are all BS artists hiding the real truth from a gullible public. An honest answer would be we don’t know and will probably never know or be able to fully explain the workings of the universe. One formula will explain everything! Impossible!!!!!!

String theory attempts to explain the universe in terms of the oscillation of a wave between two points in space. The problem is the unanswered question as to what happens when the two points are shrunk to become one point. Does the wave frequency go to infinity or does it go to zero? In either case it is an unanswered singularity           question with no meaningful answer.

Yes, even string theory has a singularity with no acceptable answer so string theory and the limitation of mathematics with an inability to explain a point or infinity or zero will never be able to answer the great mysteries of the universe at the subatomic or cosmic level.

Presently string theory is basically stating that the universe is just one infinitely large hologram and I just don’t believe that this is a complete explanation of the universe or ever will be!!!!!!