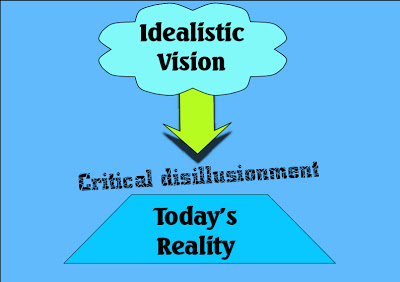 Disillusionment: n. very intensely disappointing because a subset(s) is much less good than believed in the beginning

Some if not many of us have been disillusioned at some point in our lives. We got all excited about a dream job or a potential soul mate only to discover that the dream job was not that dreamy and a potential soul mate had many undesirable characteristics which we could not live with for the long duration. Those two are examples of disillusionment.

As a general principle, don’t create and believe in unrealistic illusions, don’t create idealized visions, or don’t be deceived by humans and things and chances are that you may be disappointed occasionally but you won’t be disillusioned.