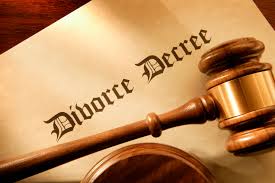 This is a worldwide definition for divorce which includes polygamous marriages in Arab countries too. If a wife in a polygamous relationship wants a divorce then the husband should be rich enough or have enough money in a government escrow account to pay alimony support of the wife and offspring until the offspring reach adulthood when the alimony payments would end or be severely reduced. With this kind of a rule the divorced wives and offspring of a polygamous relationship would not become a welfare burden upon the state but a financial burden on the exhusband.

If polygamy is ever legalized in western countries then it should be strictly limited to very wealthy men who could afford alimony payments to the wives and offspring after a divorce so they don’t become a financial welfare burden upon the nation to be supported by taxpayer’s money.

If polygamy is ever legalized in the United States then there should be a government escrow account set up to take care of the expenses of a wife with offspring after divorce so taxpayers don’t have to spend their money supporting the polygamous divorced wives with offspring. That is true marital justice for the polygamous family and the nation in which they live.

Some humans argue that love is the most important thing in a marriage and others argue that money is the most important thing in a marriage. The truth is that BOTH love and money is of primary importance in a marriage and when the love ends there should be enough money left over to support the love offspring and ex wives until the offspring reach adulthood. The family unit with offspring should be a responsible independent financial unit and not an irresponsible financial unit dependent on the taxpayers for support.

Yes, there is the possibility that both husband and wife become handicapped, unemployed and destitute, dependent on government welfare for themselves and their offspring and that is an emergency situation which the government must help with financial support as a moral obligation.