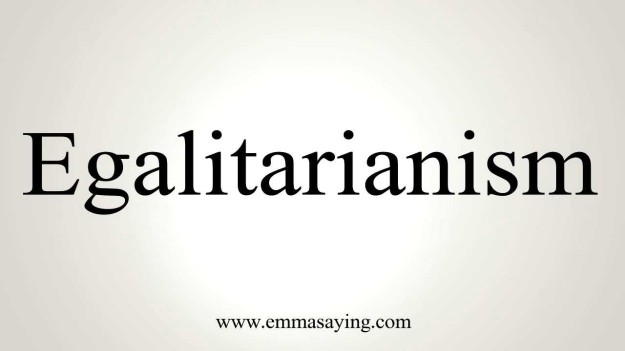 Egalitarianism: n. believing in the political and social and economic and gender identicalness of humans

The fundamental belief that all humans are basically the same results in egalitarian thinking politically, socially, economically, and in gender.

Humans are unequal in wealth, unequal in morality, unequal in family life, unequal in social connections, unequal in education, unequal in health, and unequal genetically so it is an unrealistic philosophy to assume that everyone is equal at birth. If you are unemployed and also destitute then you are definitely not equal economically and that means that you should qualify for some assistance from the government until you regain your working status again if it is a realistic possibility.

The philosophical ideal is to give humans an equal chance to prove themselves in life and qualify for the greater status if they deserve it. Unfortunately an equal chance is not only dependent on your personal inborn abilities but also is highly dependent on the environment which you are living in. Equal wealth, equal morality, equal family life, equal social connections, equal education, equal health, and equal genetics is just not a realistic appraisal of reality and it is physically an impossibility to achieve.

Equal education with interactive audio visual computer instruction may someday be a physical possibility and it offers the hope to even the poorest among us who will be able to get a high quality education on the internet through personal effort, achievement, and determination. Whether their usually bad family life will also guarantee the poor a much needed great moral personality is debatable so I predict that much inequality will remain on into the foreseeable future.