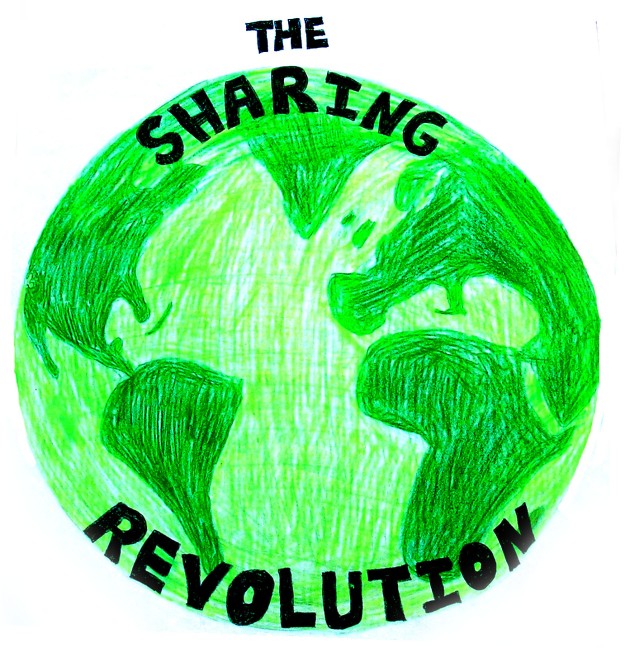 Share: v. to contribute for mutual benefit such as alternating possession of a subset(s) and/or using a subset(s) at the same time by two or more lifeforms

Sharing emotions about past events is called empathy but most of us think of sharing as the sharing of a possession or an experience with someone.

Learning to share does not come naturally to offspring who are very possessive and don’t usually want to share their toys.

Communism says it is both parties that bear the responsibility for fixing it and that is why injustice is felt by individuals who basically have to pay for another’s mistakes or mishandling of the property.

If given the choice of being taxed or not taxed most citizens would voluntarily opt out because the present state of government is so unjust and most, except for the wealthy and those on welfare, feel that they are contributing more than their just share to the operation of government.

The higher the taxation the more communistic or socialistic a nation becomes and the less efficient and unjust it becomes in sharing your wealth with others.

Socialism is delegating personal responsibility to the government where government increasingly becomes a parental figure taking care of all of your life’s needs. If you become sick, it is paid for by others, if you have offspring they are subsidized or partially paid for by others, if you become unemployed you get generous financial support until you get another job.

That many citizens begin to work the system or milk it for maximum personal benefit is the result of socialism and this parasitic nature causes the costs for the nation to increase without any motivation to decrease the generous support in the long duration.

You get rewarded generously for being sick, for being a mother with children, and for being unemployed. The result in the long duration is more sick humans, more unwed mothers with children on the dole, and many on never ending unemployment benefits. The incentive to work greatly decreases and the long duration result is a bankrupt social system where almost everyone prefers to be on government welfare benefits. The ultimate result of progressive socialism is a government ruling bureaucracy with everyone dependent on it or in reality communism which is a colossal historical failure.

How do you put incentive back into socialism which so desperately needs it?

Create two classes of citizens. One class the destitute and unemployed who are totally dependent on the government and the other a working class which is totally responsible for its own medical care, unemployment costs, and child support. If you bankrupt yourself with medical costs, unemployment costs, or child costs then you become a member of the destitute and unemployed class totally dependent on the government.

If you are totally dependent on the government then your voting rights will be less or a fraction of the voting rights of working citizens. You will lose your right to a motorized vehicle and be dependent on government door to door delivery of basic standardized needs such as food, drink, clothing, sanitary needs, cell phone, and computer and you will live in high rise apartment dwellings with or without offspring.

If you are single then you will be sharing that apartment with other welfare recipients sleeping in bunk beds more than one to a room. In effect it should be a prison like system without locks so you have the incentive to go on the internet and get reeducated in a useful job which will result in mobility freedom and the luxury of purchasing what you want and when you want it. Yes, there will once again be an incentive to get back into the work force and enjoy basic luxuries such as food and drink which you like and a dwelling in a location of your personal choice.

Yes, incentive can be put back into a socialist system but you will need two classes of citizens with different political voting power so that those on welfare do not enslave the working class of citizens. What is this new updated form of socialism called? I don’t have a name for it but it can be called Capsocialism or a mix of responsible capitalism with the social need for a safety net for the destitute and also unemployed!!!!!!

EVERY HUMAN IS NOT EQUAL ALL THE TIME and if you are destitute and unemployed then you are not equal to the working citizens of a nation. One person one vote because everyone is equal all the time? No they are not! If everyone has equal voting power throughout their lifetime then communism is the long duration unjust result. Yes, as soon as you are employed you get back your full voting rights!!!!!! The concept of human equality in its present form is outdated and needs radical revision!!!!!!