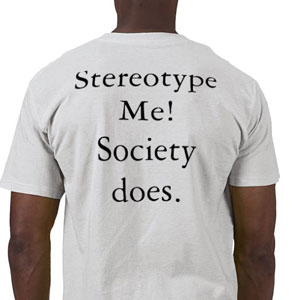 Stereotype: v. to identify a human(s) and/or subset(s) by one personality characteristic and/or one generalization which is frequently not very accurate

Hispanics are alcoholics, women are carers, and cities are industrial wastelands are stereotypes which don’t give an accurate complete description of many Hispanics, women, and cities. They are stereotypes or broad generalizations which are not accurate in many individual instances.

Beliefs in stereotypes, especially of ethnic groups, is also the foundation of prejudice and once you strongly believe in a stereotype it is very hard to change that belief because you have developed an emotional attachment to it and don’t want to or aren’t smart enough to change it.

Stereotypes are popular because they create a simplistic view of the world which doesn’t require much logical thinking. Unfortunately stereotypes will handicap a human who uses too many of them and he or she will frequently be thought of as not very smart or even prejudiced if the stereotypes are unflattering generalities of humans and things.

Historically all my black tenants have been bad tenants but I have also had many bad white tenants and the real reason that they are bad tenants is because all of them have been poor financially with lousy jobs. I have learned not to stereotype humans based on race but I have learned to stereotype them based on income. If a tenant is poor financially then the probabability that they will be a bad tenant is close to 100%. I have learned the hard way through the school of hard knocks that money is more important than race and I always ask and confirm monthly income, time on the job, and rental history.